A FM19 Story: The Wizard of the Artic

You all must have heard the usual story about the hero who got bitter to the system and withdrew himself to the cabin in the mountains to lead a simple life. As always, also in that story, a need arises among the others to summon that hero back to save the day since no one else can. They approach the stoic hermit and at first, the hero always declines to come back but eventually, he just can’t help himself and is willing to sacrifice himself for others for one last time.

The story I am about to tell you is nothing like that. That was just a cool way to start this post. My story is one of desperation and redemption. It is a story where our hero is in fact exiled so deep into the gutter that you would need a submarine to fish him out of there and believe me, people ain’t running for the subs. But one mans desperation can sometimes other man’s redemption.

From pinnacle to the pit

As some of you might remember, I took Europe by force a couple of years back. Managing the mighty Sampdoria and enjoying success on the pitch and the fruits of that success off the pitch to the fullest. In Genoa, I was a god. I lead the team to heights where they never had been and the citizens ate from the palm of my hand. Glory days but never meant to last. It actually took something related to the word glory, someone’s daughter and a confession booth in San Lorenzo Cathedral to get me disappearing to the night and leave Italy and my beloved Sampdoria.

Being chased by Vatican authorities constantly is not good for trying to succeed in a very public profession of a football manager. In my demise, I saw most of my peers showing their true colours and only a few were still keeping me in their speed-dial.  I had small stints on Benfica and VK Vojvodina but I was constantly seeing Paul Bettany everywhere and I started to freak out more and more. I decided to call it quits.

For a very long time, I hid and even changed my name and appearance. I worked as a TV pundit and actually liked my job. TV means free boobies btw. I was stress-free and happy. Long gone and forgotten.

I should have known that it was not meant to last.

Frozen grass and the midnight bingo

Rovaniemi is north. Far north. Way far up there in the north. It is so north that you play on a frozen pitch at the start and end of the season Thats exactly where I got a call from my old buddy Risto Niva. Their manager had taken a U20 job for Finland and left them with their privates hanging in the wind. The season was about to start and no one was answering their calls. In a funny coincidence, I was not answering his call either. I thought it was my alarm and pushed the wrong button.

He talked me into it in a minute. He was blowing heroin up to a nose of a junkie. I was hooked.

Dont get me wrong but the Finnish league is not exactly the dream opportunity for a lifetime if you have managed big clubs in Europe. But for someone constantly waking up screaming when Paul Bettany is whipping your behind, Rovaniemi sounds like a paradise to start over. Plus they promised to bring back the midnight bingo in the summer to get some funds to the club.

So there I was a press conference away to be named RoPs manager.

The King of Nigeria and a squad full of shite

For some of you, this might come as a shock but most of the Finnish footballers playing in the local Premiership are as useful as are bikinis in the North pole. All the players playing abroad can’t say that they are there because of the great system Finland has. They are there regardless of the atrocious system Finland has. They should thank whatever demons they worship. So saying this I mean all the staff in Finnish teams are just donkey boo. Facilities are poor and pitches are nowhere near European standards. So the game is constantly fighting against the elements and your body refusing to do what your mind has seen in telly.

Knowing this, I was in awe to see Tayo Taiwo, a former Olympic Marseille and AC Milan player in the roster. There must be something wrong when a player with +50 national caps and almost 200 games in the French league is freezing his dreadlocks in the Finnish artic. He must have done some really bad in Italy to be more than 3000 kms away from Milano playing with halfwits. Dude is by far the best player in the squad and one of the best if not the best in the league.

The rest of the team looks quite suitable for Finnish premier and there’s not too much to tell about.

In the Finnish premier, you can’t go in with very detailed tactics. Just try to figure out the strengths of your team and capitalize on those. As I found out my team has fairly decent strikers so I decided to run them as pair up front. Also, I noticed I am lacking in certain areas so I needed to make moves to cover those. After all, I ended up with a very simplistic 4-2-4 base which I play according to my opponents. We will see how that goes on or am I bound to switch stances at some point.

The root of future evil

Make no mistake. I will rise again and my stop here in Rovaniemi is only the beginning. One day I will rule European football once more. Still, I need to succeed everywhere to be able to move forward. I also want to leave everything in good order once I jump ship. I haven’t decided yet how I am going to report my proceedings but I am sure it folds the right way eventually. For now, I must run since the season starts. Until next time. 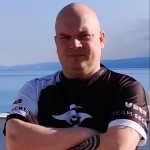 Categories: StoriesThe Wizard Of The Artic

Goalkeepers who end up on the score sheet are often regarded as glitches or abnormalities in the matrix of football nature – and they are, in a way. There’s something delightfully depraved about goalkeepers scoring Read more…

As with most great relationships between player and manager, my partnership with El Emperador Maissel Sabgh resulted from pure coincidence. As I started my career with Junior Popular de Barranquilla FC, or just Junior FC for short, we lacked a proper strike force. As it happens, a young forward has just been released by his club. He looked decent enough, and he was a product of Juniors youth academy, so he was quickly snapped up and re-joined his boyhood club. It was the start of a journey that lasted two decades in-game, an epic adventure that frustrated many a defender and goalkeeper and brought much joy and jubilation to the Junior faithful in the pixelated stands.

A guest series by Rien102 details his tactical analysis of an oncoming opponent in great detail. This is part III, the last part, of a short series.