Just to ensure clarity I am going to take a moment to explain a few terms that you will see me use throughout this primer. Most are football terms converted for use in my system. Also, note before we get started: Typically, when I say football, I mean “football” sport of the American variety with the oblong ball. When I mean the sport where one must use their foot to kick the round ball, I will, of course, refer to it as soccer.

Given the importance of space in soccer, I am surprised that there aren’t any universal ways to describe it when speaking of tactics. While I have seen reference to the “Golden Zone”, “Halfspaces”, channels, and even sometimes a grid placed over the field, I struggled with the concept of space and creating space because they lack clear definition and the terms used are somewhat nebulous. In football, these gaps and zones are different ways to describe and identify space on the field which is universal throughout the sport. When somebody says they are a 3 technique lineman or that the player ran through the A gap, you know exactly what is happening. In football, these are different ways to describe and identify space on the field and I will use them to describe what I am doing as the system was designed with gaps and zones in mind.

In football, this is where the ball starts on any given play. In soccer, I see the LOS as the defensive line and they can be used interchangeably. It doesn’t really matter if it’s a high line at the halfway line or deep in its own box. It is simply where the defense digs in its heels and you as an offense, need to find a way to get the ball around/over/through it. This is only used as a reference point for the other areas and on its own is not useful. In front of the LOS denotes the space in front of the defensive line, between the defenders and the midfield. Behind the LOS would then be the space between the defenders and the goal. This may seem reversed to the football folk, but it may make more sense when you consider that defensive line protects the box and the goal like an offensive line protects the quarterback.

In football, these are the spaces between the offensive linemen that denote where there may be space for the offense to run the ball or the defense to rush the passer. Gap control is a major component of football on both offense and defense. Books can (and have) been written on the topic. Because of my football background, I focus on the gaps in the line of scrimmage which are to be attacked and defended. Using the same naming system as in football, we start with letter “A” to identify the innermost gap and work outward in both directions along the LOS.

Football identifies the various passing zones by the routes that attack them and defenses are named based on how they defend those zones. Naming based on routes is useless for use in soccer, but identifying the zones is very helpful for identifying space and describing passing/running patterns. For simplicity, I will refer to them relative to the gaps and players on the LOS, using a similar system to defensive line techniques in football. “0” zone in the center, and increasing as we work outwards, labeling the zones immediately in front of the defenders and the zones between the defenders, in front of the gaps. Combined with the Gaps above the result for a 4-4-2 is: 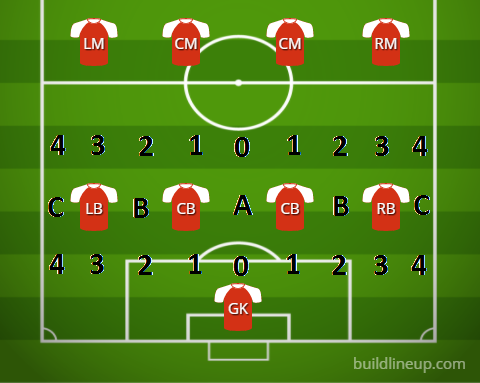 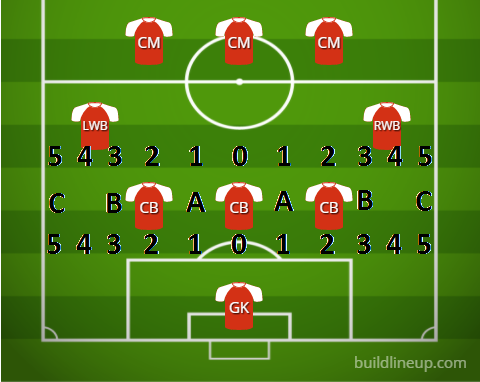 For further reference, note how the 4-1-2-3 has the same gaps/zones as the 4-4-2. The presence of a DMC doesn’t change anything, it only affects how they defend the gaps/zones. 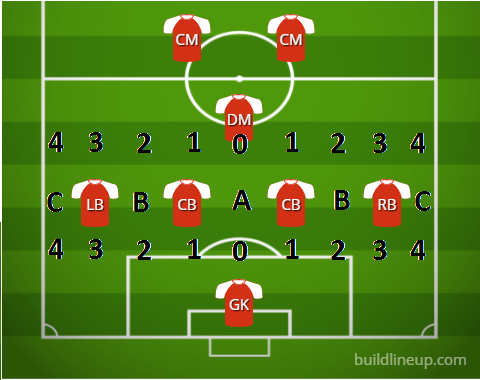 The terms I use are pretty self-explanatory, but just to ensure we are on the same page we will make a quick rundown because match-ups are key to football play design and my system. Match-ups are determined by a number of factors, but primarily via proximity, roles, and marking assignments. I consider it very important to consider how these matchups will occur so as to create situations which favor myself. It’s also worth noting that not all match-ups are created equally, and I will accept a bad match-up in one area, for a good matchup in a more favorable spot.

The most obvious mismatches are double-teams (which includes 3v2 and other overloads), but each double-team leaves me short somewhere else. If I’m going to devote those kinds of resources to shut down a player(s) on defense, I want to do it efficiently. Instead of just blindly throwing players at the problem, I look to bracket the target(s) of the double-team by placing the defenders over and under the target. This puts a defender between the ball and the target and a defender between the target and the goal, which removes the player from any possible space to get the ball. A DMC and a DC working together will lock out a forward better than 2 DC (who leave space in front of them) or 2 DMC (who give up space behind).

More commonly I’m stuck with one-on-ones. I expect my players to beat the man across from them – football is all about “players not plays”. If my players aren’t routinely winning their one-on-ones, then I can’t win. Superstars are a natural mismatch for a regular player in a one-on-one and create favorable matchups by merit of just being better than the player they are lined up against. But for normal players, I need to use attribute and skill advantages they have over the player they are matched up against. These mismatches can be created by having players with certain extreme attributes (eg. speed on wingers), odd attributes for their position (eg. a midfielder with great jumping), or by using movement to get them to match up against a player who doesn’t match-up as well against them (eg a speedy wide player coming inside and running past a slower, less agile central defender).

A player is said to have inside leverage if they are nearer the center of the field compared to the player they are matched up with. They have outside leverage if they are on the outside. Leverage can be used to describe the natural 1-2 step advantage a player has on another to getting to the ball or specific areas of the field. For example, if I want a player to receive a pass in a shooting position, inside leverage will give them an advantage in getting the ball into a favorable position. I believe this may be related to showing a player on a foot, but I’m not familiar enough to be certain.

Once I have a favorable matchup, I try to isolate those players and matchups from the others on the pitch to ensure the matchup is available to be exploited over and over again in the game. I use other players to pull, mark out, and matchup with opposing players which could potentially alter the matchup I am trying to isolate.

Can you let us know how many parts there will be so that we can leave a comment or ask questions when the article is complete.

Wow, an original point of view, enlightening as well.

This really is a wow read for me. Using football terminology really creates an interesting framework for how to look at FM. Excited for the next parts & excited to try them out in the game. Thanks Guido