Exploring The Limits Of My Tactical Knowledge; The Stuka Tactic

Published by Limited Fullback on February 1, 2017

Back in October, I posted on this site my ‘Revival Of the Four Horsemen’ tactic where I took Guido’s Original tactic as a base and turned it into a winning machine with Arsenal. I outlined at the end of the post that my main save in FM17 will be with Espanyol, and my first season I will be testing the ‘Four Horsemen’ for its reliability. The outcome was a success, achieving a  4th place finish with Espanyol in the first season.

Following that season I outlined in RCD Espanyol 2.1 that our tactics would change into a Strikerless 4-1-3-2 with the same foundations laid from the ‘Four Horsemen’. This tactic was then in use for the next two seasons where we achieved a 3rd placed finish followed by winning the league in our 3rd year, along with 2 Copa del Reys. Something which I thought was somewhat premature. So that is when I decided to test my tactical skills and attempt something completely out of my comfort zone. ‘Out of my comfort zone’ ended up developing a tactic I have dubbed Stuka (reference Guido for the name).

So what is Stuka?

Over the last three seasons, I have become very fond of the AMC setup pairing of a Shadow Striker with an Advanced Playmaker (S). The link-up play between the two has been phenomenal, watching the movement of the SS darting forward while the AP drops deep. The whole fluidity of their play is something that I have really enjoyed watching. This advanced pair is backed up by a midfield consisting of a DLP (S) and a single MC (S) with a DM (D) behind those two. These men form the central spine of the side. The DM provides cover so the DLP and MC can support both AM’s in attacking moves. The MC getting forward move often than not getting himself into goal scoring opportunities in the final third. The DLP (S) drifts in the gap between the DM and AM slots, picking out the passes in tight situations while getting involved heavily in attacking moves.

These five roles and positions were going to be the base/spine of the new tactic. So to really test myself and my own knowledge, we turned a corner and took a step into a territory I had never explored before; the back three. Ultimately, this is what Stuka proved to be:

A  Strikerless 3-5-2 with Defensive wingers. I opted for DW’s because I wanted to implement some width but also wanted some protection on the flanks. “So why didn’t you opt for Wing Backs?” Well like I said earlier, I wanted to test my tactical skills in this game, WB’s are an obvious choice in a 3-5-2 so let’s see if this can work. It also gives me the opportunity to keep the CM pairing that I mentioned earlier. I will be posting a more in-depth piece on the Defensive Winger in the next few days.

Regarding our instructions and style, they have changed, more so than the last transitional shift, but nothing too drastic. We still maintain the core principles of our style, direct passing into space, playing out from the back and working the ball into the box. The adjustments that I have made are a few tweaks in our original setup. Our defensive line has been moved back to a standard line from slightly higher as the DM sits in the space rather nicely, and with the absence of fullbacks, I wanted some more security sitting slightly deeper. The DM then acts as a cover for the absent fullbacks.

We are still playing a very fluid style, but I want the players to be more disciplined with their positional play. At the risk of repeating myself ad nauseam, due to the massive change in the defence, I want the players to really be conscious of where they are at all times. Our mentality though has shifted back a couple of notches, going from attacking to standard.

The last thing I changed, and probably the most important, was going from a narrow to a balanced formation regarding the team’s width. I don’t want to give the opposition and additional room out wide due to our missing fullbacks, so I want the outside CD’s to drift out either side, not so far that we leave massive gaps, but enough to deal with wingers looking to punish us.

I know that the potential major flaw with a back three is the lack of support in the wide areas. If we come up against a 442, a 433 or any formation with actual wingers, the chances are we will be doubled up out wide. This is something that I am willing to concede trying to build this system. With our CD’s pushing out wider and the DW’s coming back to help, we should be ok to cope with supportive fullbacks causing us problems.

This video is an example of some of the passing, and movement in our new system. It shows our positional layout and how we can overload team in areas. I have also broken each segment down into screenshots for a different view.

You can see in the overhead shot that our width is rather good and the wide CB’s have their areas covered. You can also see the DM covering the space between but also close enough to act as an option in the attacking move. Our midfield 4 are all supporting the move with our AM’s. Now watch the attacking move as we continue, our AM’s are played in from wide, and they link up together and pull the opposing CB’s away from their positions. They also catch the attention from the opposing midfielder, who is now tracking back. This altogether leaves a perfect hole for Ascacibar to burst into and finish the move. The fullback doesn’t come over because he is occupied by our DW, giving Ascacibar the perfect opportunity to score. Feel free to go back and watch the clip again to see it in its full glory.

As the current league table shows, we are in a pretty healthy position, winning 10, drawing 6 and only the 1 defeat. Also, we have scored 32 goals in 17 games, only Barcelona and Real Madrid have managed to score more. The most pleasing thing is the amount we have conceded, 5 goals in 17 games with a back 3, the best in the division.

Now this tactic has been built with a side that has been nurtured under my Strikerless ways for nearly 4 years now, and I feel confident to mention some prerequisites before you attempt to play this system (or any like it for that matter).

Each player needs to have the following attributes:

Decisions are another attribute that you may want to consider, because if poor choices are made on the pitch, then it can lead to goals conceded.

Now if you have made it this far then thank you, here is your reward, the download link:

Disclaimer: As mentioned above, this is not a plug and play, this is a well thought-out 3-5-2 system that fit with my players and my philosophy. Please take into consideration the highlighted areas before trying this tactic.

On a side note, I am currently on a bit of a graphical conquest in FM where I am creating custom kits, banners, logos and league kit packs for members of the FM community. If any of you wonderful readers would like anything created then check out my site limited fullback and get in touch on Twitter @marcbowen17. Your support is highly appreciated. 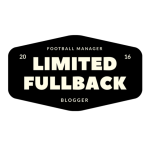 […] with my  3-5-2 strikerless system, known as Stuka,  I have 3 Central Defenders and rather than go with the conventional Wing Back approach, I tested […]

I have debated whether or not to post this article. Should I offer a downloadable version of my tactics, just for people to generally ignore why they work in a specific way and complain to yours truly about their perceived lack of progress or success? Ultimately, there is no right or wrong way to approach things with FM. If you're getting more success from downloadable tactics and that feels fulfilling enough, then crack on. This article contains links to the latest formation of my "Riders (on the storm)" series of tactics, using both a deep and middle block in defence.

A Tactical Roadmap To Evolution

As my tactics setup evolved and developed, I noticed my build-up from the back was far too easily disrupted by high-intensity pressing sides. They targeted my deep-lying playmaker and, at times, my ball-playing defender. Players Read more…

My Throw-In Setups For FM23

Set pieces in football, and thus in Football Manager, have received much attention and study. But what about the innocuous throw-in? Apart from when a team develops a long throw-in programme (see Delap, Rory, or last year’s trebuchet-styled throw-ins), it is largely ignored. This doesn’t do the humble throw-in justice, as they are essential to your Football Manager game. Just throwing the ball somewhere willy-nilly not only robs you of a potential goalscoring opportunity (depending on your location, of course), but it also increases your risk of losing the ball and ending up on the wrong side of a devastating counter-attack. So again, throw-ins are far more important than you might think.