As FM17 has been released for a week, it’s time to test my earlier efforts from the Beta and see if they are still effective in the full release of the game. After all, with quite a few updates coming out during the beta phase of the game, the match engine has changed a wee bit.

The observant managers among you (and loyal readers of this blog) will recognize this setup as being one I originally promoted for FM16. That would be factually correct. In fact, all I did in this Beta was import my old FM16 set piece routines to see which ones were still effective. It turns out, this particular one is still quite effective during Beta and remains effective during the full release of FM.

Versatility is the key

I have tested the routine during several seasons with AS Roma and we score a goal every two games or so on average. As you have seen in the previous piece, not all goals are scored directly from the corner. In fact, quite a few are in fact scored from recycled possession and exploiting the general disarray in the opposing defence. According to the game itself, these goals are not to be counted as corner goals. That’s all fine and dandy, but they all started with a corner. The causality between the corner and the goal is most definitely present in each and every goal scored in such a fashion.

Either way, the key word to what makes this routine work is its versatility. You are not heavily reliant on one or two gigantic, towering centre-backs to head the ball into the back of the net, nor are you expecting a player to volley it in from the edge of the box every time. The corner taker generally takes his pick from a host of options to see which one would be the most effective.

When the ball is lumped into the penalty area there are so many players crowding the box, that there will always be someone open to hit the ball. The lurking player ensures possession recycling (and offers a threat for volleys from the edge of the box) and one player stays back if needed to snuff out counter-attacks. Not pretty and you’d get murdered versus human opposition, but quite effective against the more rigid AI because of the unpredictable nature of the setup and the many options it offers. 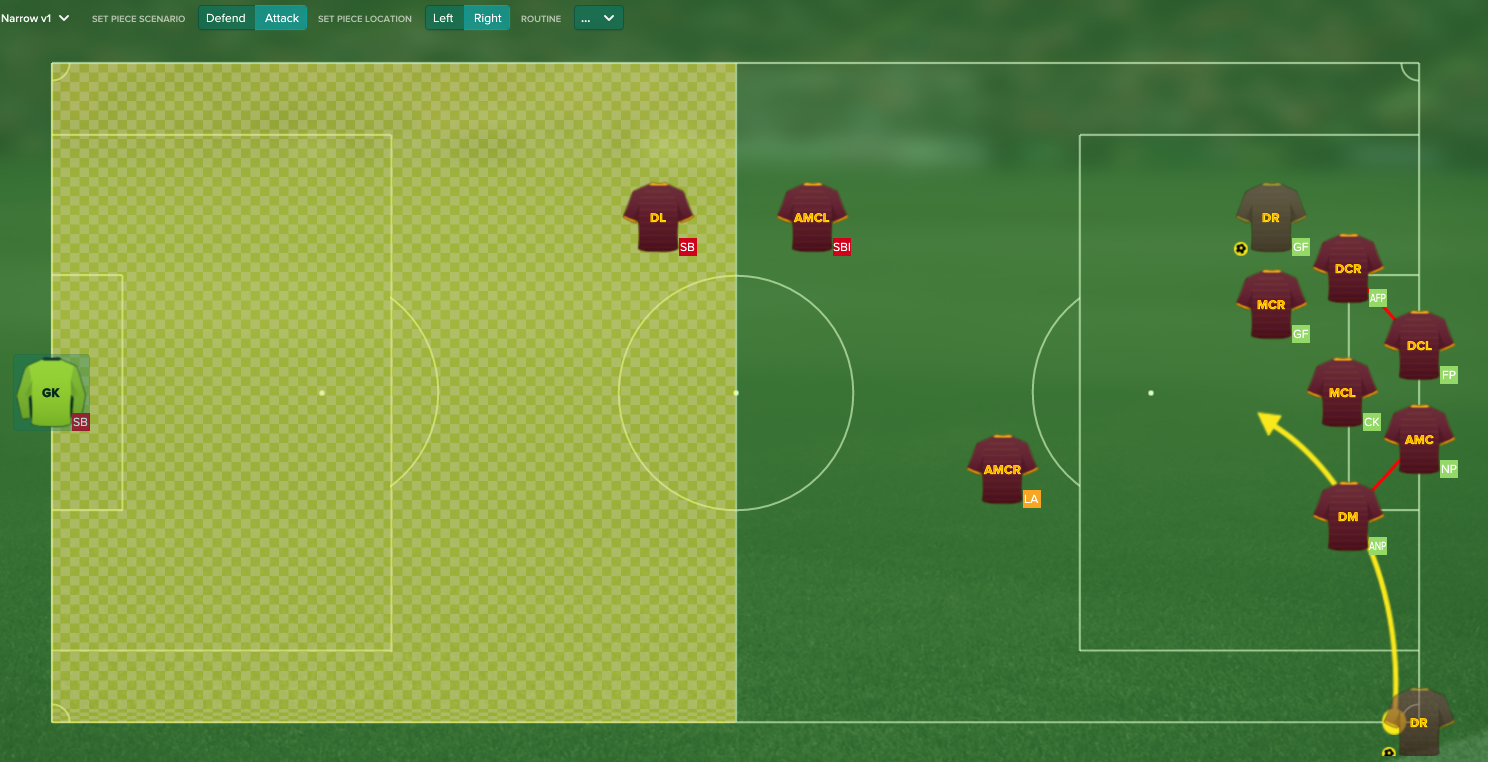 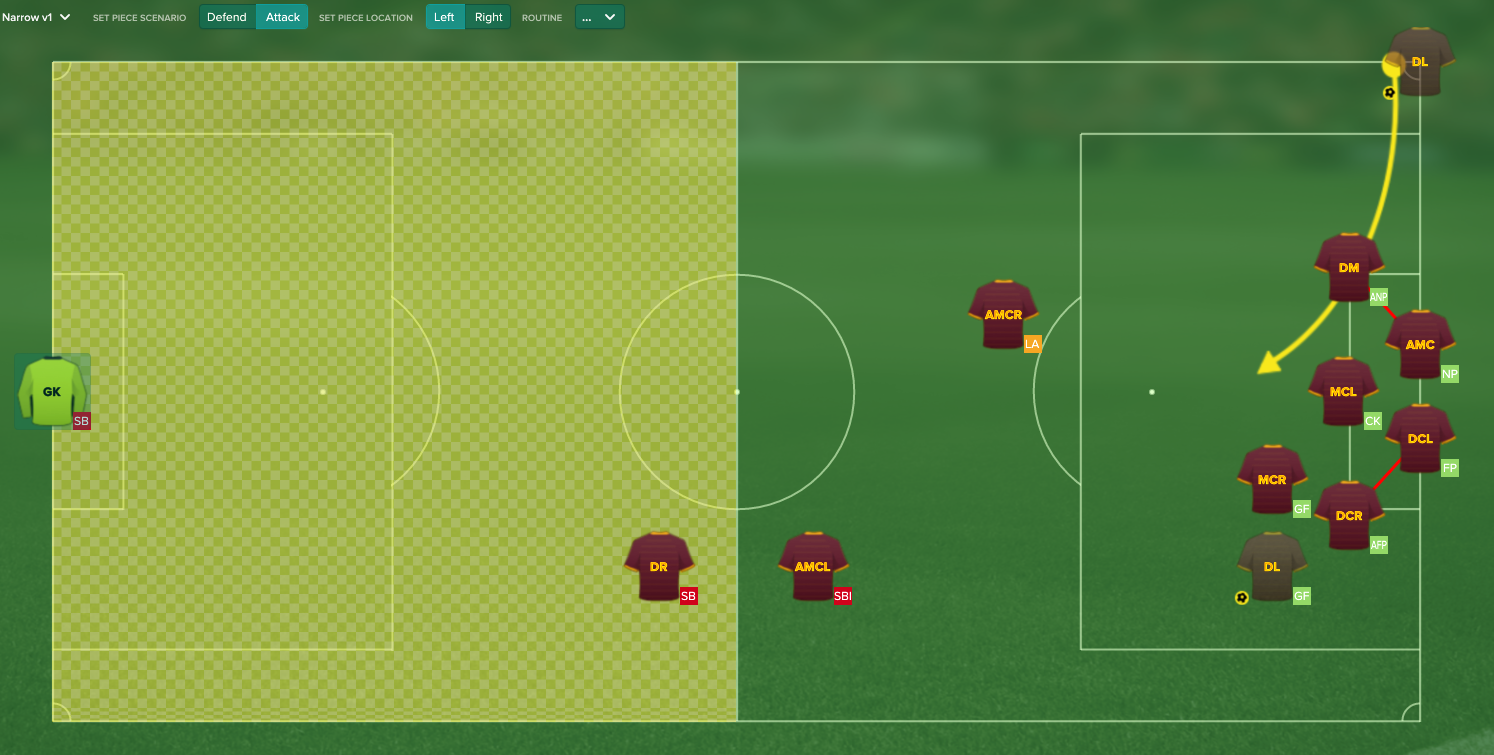 I haven’t quite tested the difference between inswinging or out swinging corners, but I do have a designated corner-taker, who is always kept outside of the penalty area, to ensure a maximum spread of bodies across the box. It’s not fancy, it’s not sophisticated, but it’s damn effective.

The importance of effective distribution

The positioning of the players at corners is just one element of the total sum that makes up a successful corner-routine. Besides placing your players in key positions within the opposition’s penalty area, you are also going to need some sort of delivery system, basically, a player who can actually kick the ball quite accurately towards one your own men in the penalty area. For me, a good corner taker should possess the following attributes.

When I am looking for someone to take the corners, these are the attributes I look for. In this setup, where the corner taker effectively takes the decision to run a specific play, it’s even more important to have an effective distribution. A poor call on his end will mean ineffective corners.

When you download these files, place them in the following folder:

You can import the files in-game when you are setting your offensive set pieces.

which footed player works best for each side? inswinger or outswinger? plus where is the corner kicker sending it to? the penalty area?

Tends to vary, I have no definitive data on that subject yet.

I will give these a go, love your stuff buddy.

Best of luck and let me know how they work.

[…] If you’re trying to score more goals from corners, you should definitely give this post on Strikerless a go. […]

[…] If you’re trying to score more goals from corners, you should definitely give this post on Strikerless a go. […]