It’s hardly a new tactic or a new approach to matters. In fact, you could say the long throw has gained acceptance as part of a robust approach to the game, pioneered by someone like Rory Delap upto the point where many Premier League clubs now use it as a legitimate weapon. For a throw-in anywhere in line with the penalty area, a player will be designated to hurl the ball into the box in the mode of a surrogate corner kick.

In order to end up with moments like these, you need a mere two things:

I can be quite brief about this section. The default throw-in settings, combined with the right delivery are proving to be quite lethal. You could probably improve further upon the system, but it’s a good system as is. Just for reference, let me show you the settings I am working with. 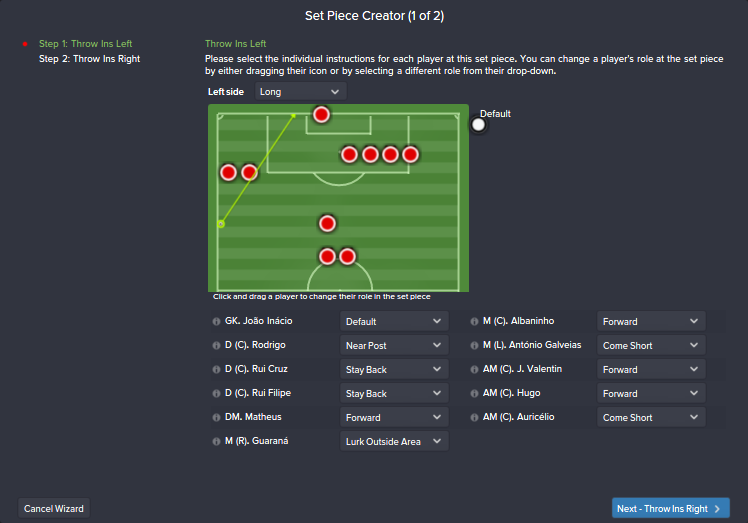 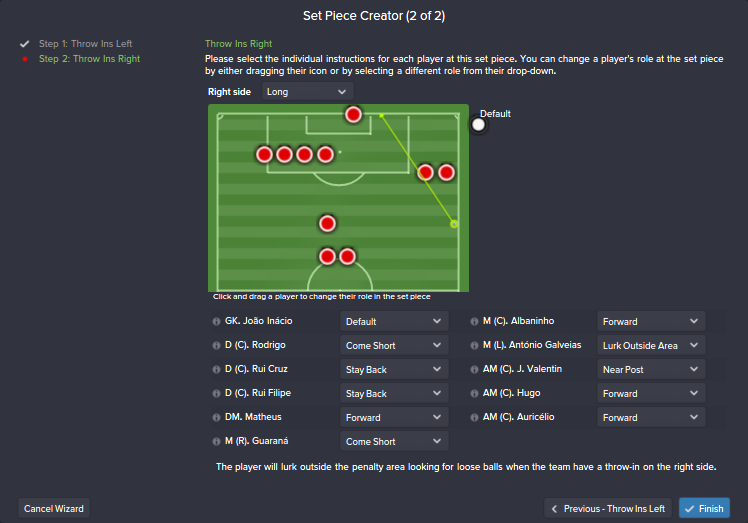 These are pretty much the default settings for throw-ins for the formation I am playing. As I said before, there is probably room for improvement, but these settings work. In-game, they result in situations like these. 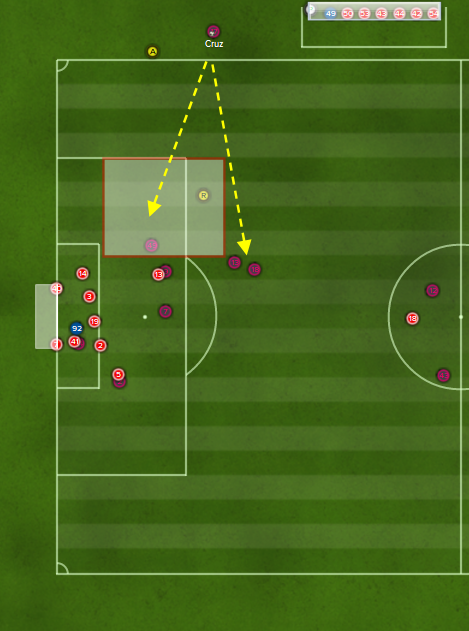 The red square is pretty much the ideal delivery zone, where you want your throw-in to end up. This leaves the throw-in taker with two realistic passing options, either one of the two lurkers, who can then run into the box, pass it or shoot, or one of the players already in the box. Naturally, you need to set the distribution for throw-ins to long in order to achieve this.

In the above video, you can see three goals in a single game eminating from a throw-in. You can see that it’s basically an extra corner. With the AI’s throw-in defence looking sub-par, it’s a great way to bag a few extra goals.

The delivery system is the somewhat ignominious name for the player fulfilling the Delap role, our long range throw-in cannon. Let me introduce you to my very own throw-in cannon first. 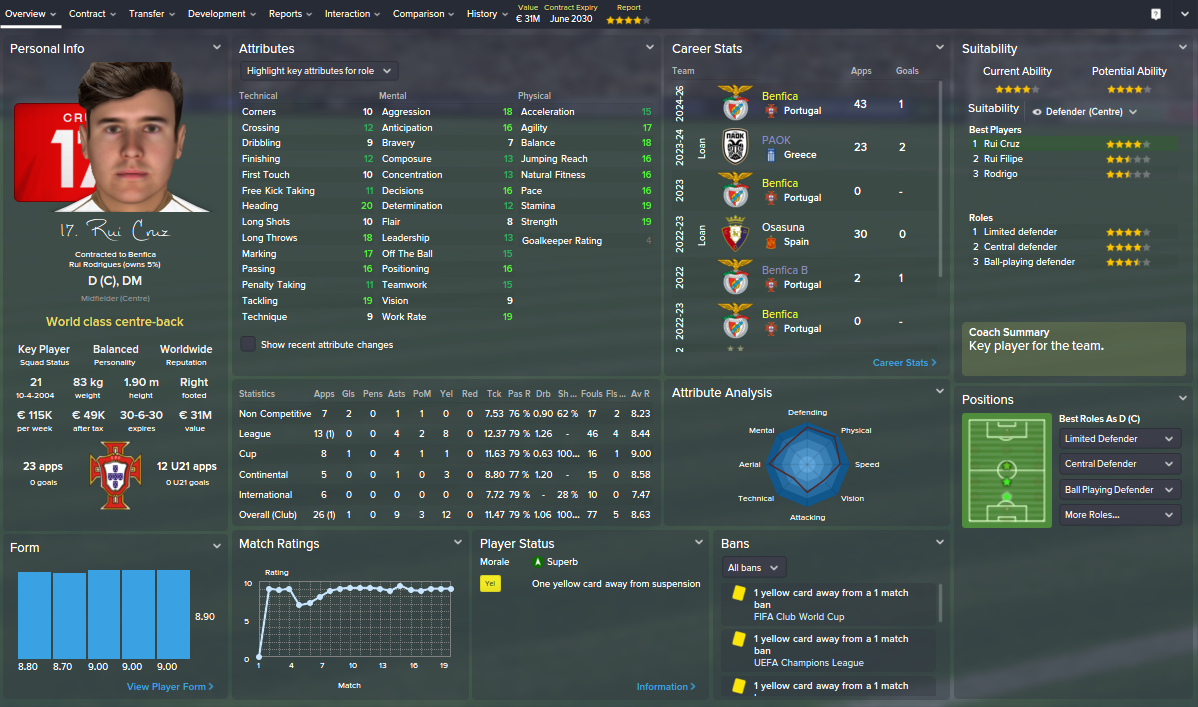 Besides being an absolutely lethal defender, Rui Cruz also possesses a decent long throw, which was slowly developed over the past two seasons. You can also see the amount of assists he racked up with this, which is not even counting the amount of secondary assists, where he throws it to a lurker, who then passes it for a goal. His assist-tally is solely down to throw-ins, and it’s a decent return. Anyway, the long throws attribute is ofcourse very important here.

When a player doesn’t possess a high attribute for long throws, you can ofcourse improve this by having a player specifically train for this attribute. You can raise the value of the attribute by 3 to 4 points in a seasons time, so it could be an attribute well worth developing. This is the training regime for one of my U19 players, whom I want to train to be a throw-in cannon as well.

An aspect I don’t want to underrate is the PPM Possesses Long Flat Throw. As you can see in the training regime above, I have asked my coaches to develop this PPM as well, as I do feel it’s of added value and absolutely increases the chance of you scoring from a long throw. If the ball isn’t delivered quickly, defenders will have a chance to anticipate on the flight of the ball and re-position themselves accordingly.

As blog reader and Sporting de Gijón supporter, this analysis of my team needs and deserves to be in this post, I guess.

Right Full back, this year acting as CB, Luis Hernández, has became a national reputed throw-in taker. On top of that, Left FB Alex Menéndez is also a great thrower; result: Sporting is scoring far more goals from throw-ins than Corner kicks:

It’s in spanish but I guess that understand it is some of a doable task.

Love your work here, by the way!!!

That is a really cool video 🙂 Yeah, that’s basically what I want to achieve as well. Man, if I had found this video sooner, I’d have used it. In fact, I may edit it in now. Thanks mate!

Azpilicueta it is a letal weapon when comes long throws. My team played several times against Chelsea and always he was a threat.
I tried to improve long throws for a few players trought PPM but always designated coaches, said, it is a waste of time to improve that PPM.
But in future i focus on this one, to see how it works.
Nice job with this article, i know it about this exploit but i didn’t find a good set up.
And, btw, what skin you use it ?
Thanks
I don’t make comments on your article but i read everything. To bad for me, because i play FM from 2012 and i heard about you just a year ago.

The skin is the MMCVX by Emil Debski. My coaches always say it’s a waste of time, but I do it anyway and they learn the skills as well. Thanks for reading and commenting, mate 🙂

The 4.0 sometime in the near future 🙂

Guido mate what can I say. You re even great at the simple stuff. A couple of tweaks and now I have two more sources to create those CCCs!

hi mate
I am one of your silent fans since 2014 🙂
So,i had a question for you concerning set piece either corner or throws in.
As you notice set pieces in this version is so effective when you compare it with fm2014
My question is there any change in the set piece instruction when you change the formation,for example say i am playing 442 and i set up the instructions and it worked perfect,so i changed my formation to any tactic say 433 so did the instructions change according to that.

did you have any advice in corner defending especially when u play online game and your buddies use short corner or in throw in when its long ?
THANKS

Not yet, but it’s an interesting concept I need to look into.

hi. I would want to ask a question. I see there,you set up your player through throw in settings.how did you do that? At my fm,every player,who got long flat bullet throw ppm, he made my throw in settings not useful anymore. The player set up become my attacking corner set up

this really give me hard time,as I put my main target in far post,since I’m aiming corner to far post. and throw in,long throw,wont ever reach far post.

The settings are pretty much the default settings, just with a long throw finding more space.

I think the positioning looks like the corner setup. The long throws are definitely overpowered when a player has a bullet throw, it just catches defenders off-guard.

[…] I’ve incorporated several set piece routines into the tactic as well, including a Delap-styled throw-in routine I wrote about […]

[…] year’s version saw the tremendously overpowered long throw tactic help teams soar to new heights. Putting the exploitative nature of this routine aside though, you […]