As you may or may not have noticed, I have recently started posting content originally written by Lee (@FMAnalysis). To be more specific, I have started re-posting his Mechanising The Play-series, which is probably one of the best FM-tactics-related series I have ever read. Lee’s ideas are still relevant, regardless of the Match Engine and version of the game, because they are ideas that apply to football in general. Despite my name being listed as the author, I find it is important that you realise that the actual author is Lee Scott (@FMAnalysis). So, without wasting anymore of your precious time, I present to you the second article of a brilliant series.

For a number of years now I’ve been reviewing others tactics in a bid to help them tweak and improve. One thing that has stood out for me over that time has been that most issues found are defensive ones. It makes sense really, when we create a tactic in game the emphasis tends to be on what we want to achieve going forward with the defensive side of the game almost overlooked. There is however one large aspect of the defensive game that we can look to put in place that will go a long way to negating those defensive issues if it’s implemented properly – that aspect is the defensive block.

What though is a defensive block? Well for the definition I find it’s best to refer to the ever reliable Michael Cox of Zonal Marking “A ‘high block’ means pressing with a high defensive line, a ‘low block’ means sitting deep. A medium block is, obviously, in between.” It really is that simple! By deciding which of these three defensive blocks we are going to use when building a new tactic though we can give something of an identity to our side in the defensive phase and that in turn will give us an effective base to build upon going forward.

These articles tend to hint somewhat at my obsession with Barcelona and indeed with Sergio Busquets but they are once again the tactical model to watch. Barcelona play with a very high defensive block with the defensive line pressing deep and forwards applying the initial phase of pressure, if you watch Busquets during a match though then you can clearly see his influence in setting the depth of the block and leading the side. How though can we implement this in Football Manager?

When it comes to setting the depth of defensive block with your side then there are a couple of key – and very obvious instructions – to set. First of all we have to consider the defensive line, as we can see from the definition above the high block depends upon a high defensive line, as such and as common sense will dictate we are looking to set the defensive line to push as far up as possible. That will however leave space in behind that the AI can perhaps look to capitalise on and as such we have to implement closing down throughout our side starting with the attackers. The key is to have the pressure exerted on the AI starting with our strikers and filtering throughout the side to force the AI to make a mistake and choose a bad pass 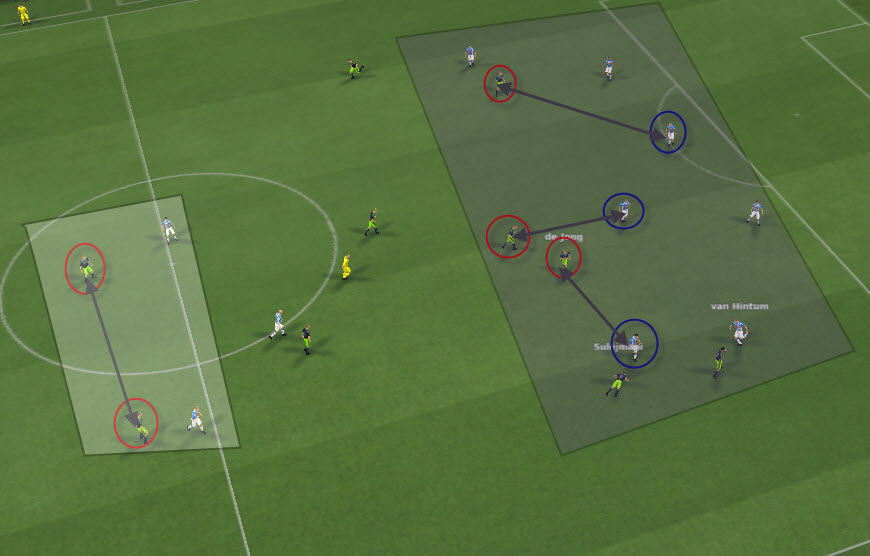 Here we have the high block in action. The white shaded section shows our defensive line which has pushed right up to the halfway line. This gives us an excellent base to build upon should be effect a quick turnover of possession as the AI are being forced to operate purely in their half. The risk is present for the long ball over the top but that risk is negated by the pressing of our forward players. As you can see in the purple shaded are the AI has possession but there are no easy passes for the AI to complete and they are forced into a mistake. 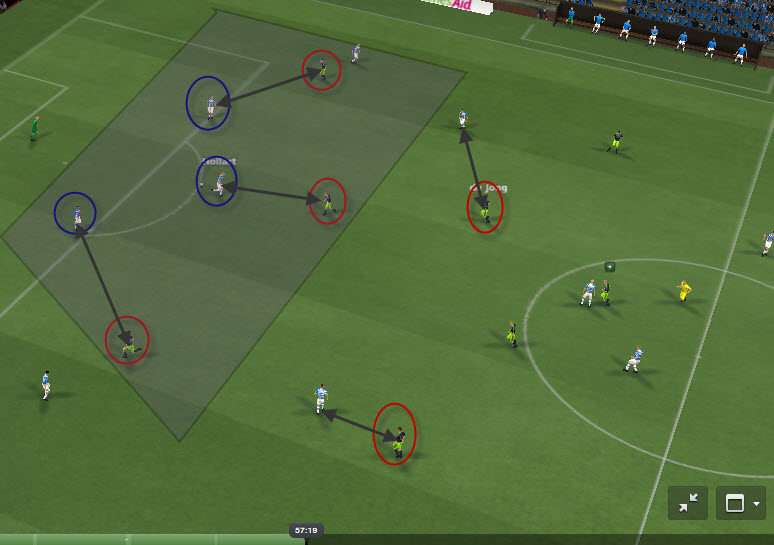 This time our defensive line is just out of picture having pushed up once again to the half way line. Once again though the key to this defensive block is in the pressing early by the forward players. There are two distinct phases of pressure with first of all the attackers in the purple shaded area pushing on to the defenders then the next line of midfielders looking to apply pressure to cut out the chance of a medium length pass out of defence. Once again the high block is designed to force a turnover and a mistake.

The medium block is of course the most balanced of the three, you are neither leaving huge gaps behind the defensive line and nor are you sitting your defensive line so deep that you are inviting increased pressure upon your team. As such the level of both defensive line and closing down is extremely subjective depending on what you want to see from your team. 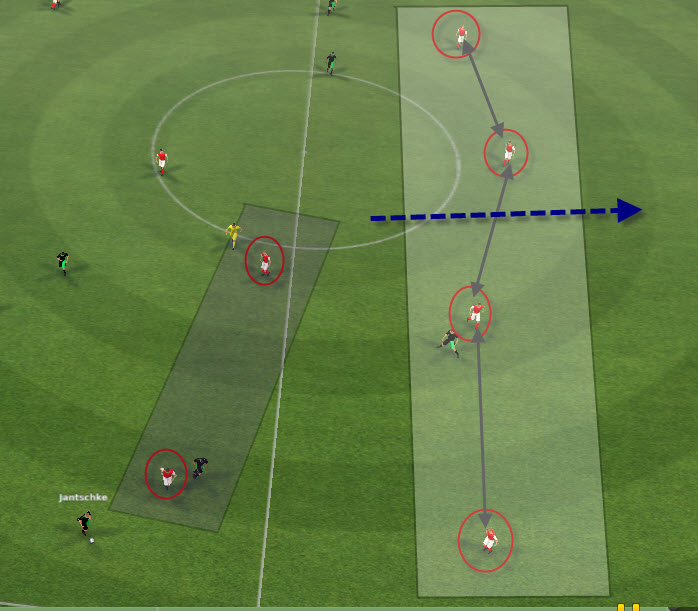 Again we have to distinct areas highlighted. The defensive line are moving back towards their own goal as the AI threaten down their right flank. The line is holding shape and moving together despite only being engaged by a single AI striker, we are not looking for players to step out to engage deeper threats and thus leave gaps in the line. The secondary level of pressure in the purple are is looking to apply pressure at the midpoint before the AI moves in to the final third. 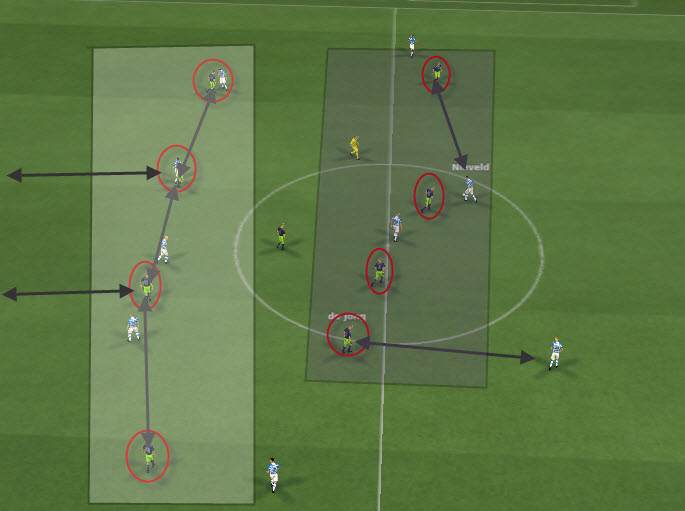 Again one of the key elements in this medium block is the effective line maintained by the defence. They are looking to drop back to negate the space for the AI to attack with a direct pass and they are being directly engaged by three AI players. At this point though given that the defence aren’t encouraged to step out and press the ball we aren’t being overloaded at any point. The secondary pressure is being shown again as the AI reach towards the half way line our midfield unit presses to disrupt any easy pass in to the strikers.

The low block does of course mean an extremely deep defensive line and that in turn encourages the AI to press on and try to overload your defensive unit, on the flip side however it can be an effective attacking weapon with a counter attacking system. The forwards are not encouraged to press allowing to AI to build around them and the midfield will sit off and only press as the AI reaches the final third and presses towards the penalty area. 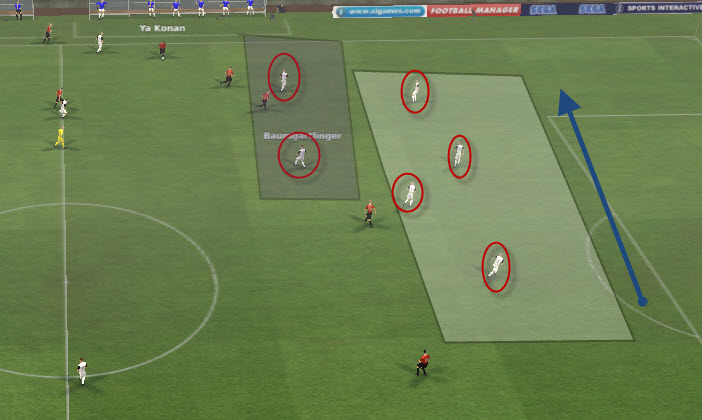 Our defensive unit has shifted to the near side of the pitch as is good practice to protect the threat coming from the right flank. As the play develops they will as a unit drop in to a deep position to defend the penalty area and the midfield shield in front will move to engage as the AI moves towards their current position. Given the deep line we are protected against the deep runners. 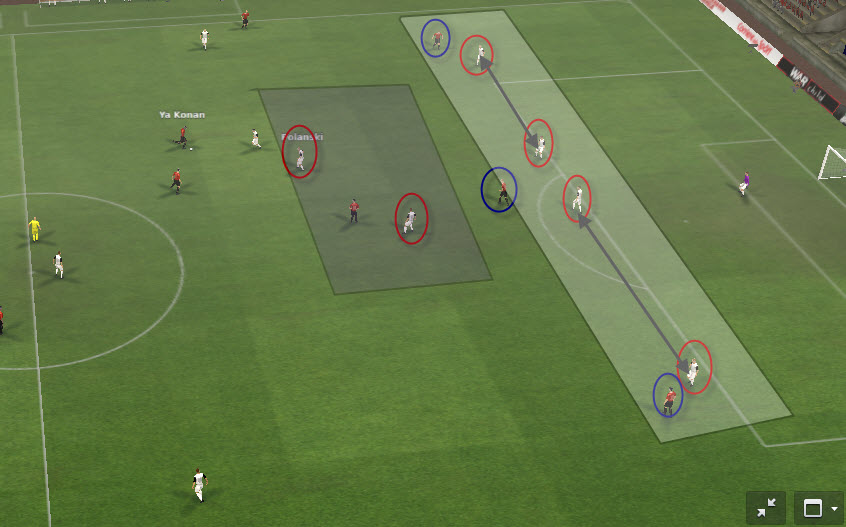 Once again in the low block our defensive line is maintaining an excellent position defending across the width of the penalty area with perfect spacing. The three AI attacking players are all being picked up by our defenders with no obvious open pass. The pressure from the midfield will once again be applied as the AI moves in to the final third and the purple shaded area. If we are able to effect a quick transition to attack in this area then the AI will have been sucked up the field and we will have the possibility of a swift and effective counter attack.

As you can see there are three distinct defensive blocks that you can look to build in to your tactical system. Each one has both positive and negative connotations and can be used to compliment whatever you are realistically looking to achieve in an attacking sense. The defensive side of the game is certainly not one that we should be overlooking. A good tactic is a balanced tactic!

So, in the High and medium we can apply ‘Pressure Higher Up’ and ‘Close Down More’? Any other we should apply without the concerns of each teams specific players and qualities to have a good high or medium press?

That would be the idea, yes.

Hi Guido! Kinda off-topic, but what do you think of Trequartistas in FM2015? I would love to use them, but I always find trouble to make them do what I want, Enganches are way easier. Do you think it’s possible to get them to work with at least a Shadow Striker and a Central Winger? Do you want to take on the challenge? 😛

Nice article, and it explains the concept of a Defensive Block really well. I can also imagine in which case you would want to apply which type of block. For example, if you have quick defenders with a high team-work attribute, a high block is a good idea because they will catch the opponents offside, and in case one of them slips through, they can chase.

From an instructions perspective, are these any specific team / player instructions that should be called out?

Common sense dictates that would be the smartest approach to things, yep. There aren’t any specific settings, but perhaps you can ask the original author, Lee Scott?