In an earlier post, I mentioned the patented sign-to-sell idea, which roughly means you sign players you have no intention of ever fielding purely for the intention of selling them for profit. Simply identifying and signing said players really isn’t enough though. Just having them sit in your reserves is not going to make it easy for you to sell them, let alone turn a profit. Allow me to show you what I mean with a simple case study.

One of my scouts informed me that I could sign Qatari international Sadiq Al-Shammari on a Bosman deal. Let’s have a look at this strapping fellow, shall we?

Sadiq Al-Shammari is a proper steal at this value.

At first glance, we see a decent enough player, a well rounded player in the prime of his life. The 41.5k value does not do his actual quality justice, but playing in the Qatari Stars League is not helping his value improve much. Despite all of this, his reputation is fairly high and playing for a better side like mine should see his value rise quite rapidly. In this case, Sadiq checks the first box, he’s an established player, available for way less than what he’s actually worth.

Looking at his history, we see Sadiq checks a second box as well.

A lad with pedigree.

Due to PSG’s Qatari owners, the French giants tend to spawn the occassional Qatari newgen. Whilst Sadiq was not good enough to feature in the PSG first team, he has trained with some fine players and under a talented coaching staff. With PSG routinely producing classy newgens, there’s a fairly decent chance Sadiq has some untapped potential in him.

An added benefit of this French pedigree is his double nationality. Having an actual EU passport makes him more attractive for most European clubs, especially those located in countries where Work Permits are a necessary evil. All of this makes him well worth signing and his value is expected to rise quite a bit.

First thing I do after signing a player like Sadiq is place him in the reserve squad. He was signed as a backup for first team, so he won’t be too concerned about being placed in the reserves. We need him to get some matches under his belt anyway and allow him a chance to work with the excellent coaching staff I have assembled over the years. 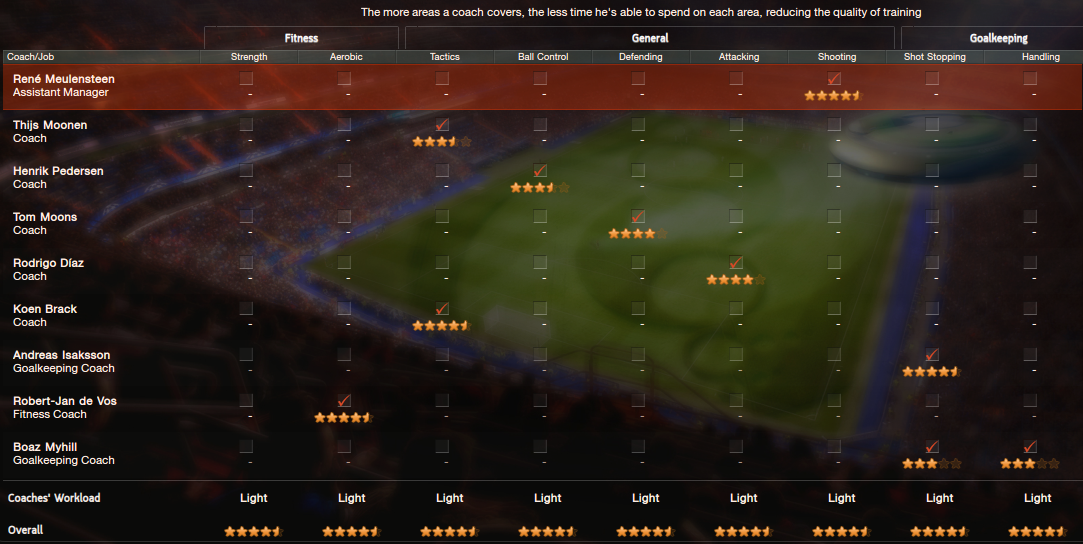 My quite superb coaching staff. Incidentally, I have 23 coaches, so you can’t see them all on that screenshot.

So what can six months of training do for Sadiq?

His stats have improved and his value has sky-rocketed.

A mere 6 months in the warm bossom of my club and its amazing coaches has done wonders for Sadiq’s stats. As was to be expected, his value was re-evaluated to match the stature of the club he is playing for, setting his value at 6.25 million right now. Not bad, but we can always milk it further. It’s always easier to sell a player after a decent season for a club and well, Sadiq hasn’t played in first team in the past six months.

So what we need is to offer Sadiq to other clubs, to try and get him some games. 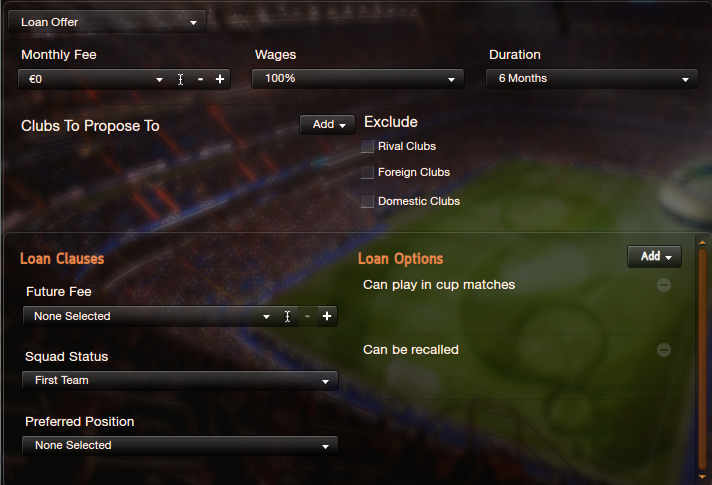 I feel that just listing a player for loan is often not enough to generate interest for said player, so I actively offer them to other clubs. I always go for 100% wages, so I don’t lose money on the deal. Never ever let a player compete against you, so make sure you un-tick the “can play against own team option.” The option to recall is useful when a player is not getting enough first team action or when-ever you feel you need the player yourself.

When the player is good enough, there are always clubs who respond with an offer. Don’t fuck it up at this stage by trying to negotiate a monthly fee. Remember, we’re trying to polish this player to sell for a profit later on, so we don’t need to get greedy right now. In this example, Sadiq got loan offers from several clubs, all with decent training facilities.

When a player makes a move on loan like that, just make sure to keep an eye on your loanee. I always ask for scout reports on such a player. If a player is not getting enough first team football, recall him and loan him away to another club. In an ideal situation though, a player will see his value rise. Just have a look at our buddy Sadiq.

His value has risen from just over 6 million to 10 million. Apparently, playing in a stronger league raises a players reputation and thus his value. Selling a player like this, with an inflated value, should be quite easy. 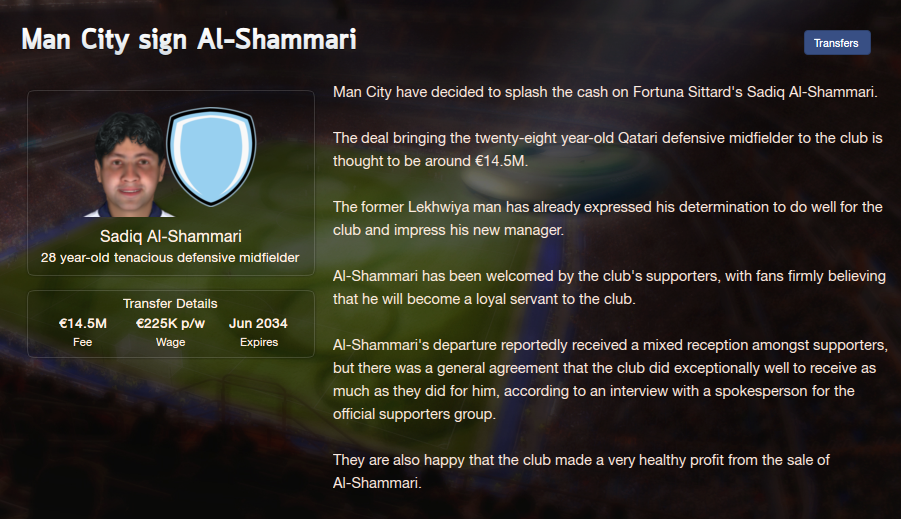 If you’re able to negotiate a deal properly, you can get upto 50% on top of a players market value. If you want to read more about negotiating a good deal, give one of my older blog posts a read. Either way, it’s a quick and simple way to raise the profile and value of a player and make some extra money on the side.

Had a little look around for something on recruitment and the like and realised this was probably the right place to come. I have a load of good scouts finding a load of good players on top of the ones I already have at the club, but I am finding it generally very difficult to sell players. Some examples: Daley Blind, worth 15m, sold for 7.5m; Shinji Kagawa, worth 15m, sold for 11m; Antonio Valencia, worth 12m, sold for 2.5m. This is happening nearly every time I try and ship an unwanted player out. The only time I get bids at or above a player’s value are for those players in my team who are playing really well – De Gea, Rafael etc – and of course for the most part I really don’t want to sell these players. Just interested whether you put them on unwanted list, offer them out or just wait for a bid.

What I have found is that the players need action if you want to sell them. Merely setting their status to “unwanted” alerts clubs you want to sell, but also screams of desperation and tends to draw below value bids. I often loan players away for half a season and sell them at the end of their loan period, so they can try and raise their profile with another club. I do always offer them out and make them unwanted, but try to make sure they get their fair share of minutes.

I have a question, when looking for new scouts, how do you find them with knowledge in obscure countries, such as Qatar? As far as I know there isn’t an option in the search for scouts knowledge..

When looking for scouts, I generally go for the attributes. A lot of knowledge of foreign countries is a bonus, but if they don’t have that knowledge, they can always build knowledge by spending time there. A long-term investment, so to speak. Hopen that helps.

Hi Guido, what skin is that you’re using?

The Ruan/Esposito Conundrum; The Devil Is In The Details

During our succession save, two most excellent forwards played a major part in the quick ascension of Depor; Internazionale's Sebastiano Esposito and a Brazilian newgen forward called Ruan. While both forwards were formidable forces on their own, our tactical tendency had quickly shifted to a single-forward setup. Neither Ruan nor Esposito was undisputed for all the managers involved. This ongoing mystery plagued the minds of the entire managerial pool. How can two obviously world-class players vacillate between quietly mediocre performances and stellar form within the course of a season?

I am not going to take credit for coming up with this style of graphic, I saw it in one of the articles over at Voetbal International and figured it looked cool enough to replicate. While I am not at all an expert in the usage of Excel, it didn't take me long to whip up something that looked reasonably good. It's a quick way to identify squad management issues and let's be honest, it looks cool in your blog or on your social media page as well.

To me, one of the most exciting parts of a new version of Football Manager means perusing the new database: uncovering hidden gems, building them up and then wreaking strikerless havoc with them. This shortlist consists of my findings so far.