Set piece plays are an essential aspect of the game. If you are unable to break down a particularly sturdy defence, a set piece may be all you need to pry open the defence. Hell, you can win games by making sure your offensive set pieces are good. Just look at Rehhagel’s Greece, in the knock-out stages of the 2004 European Championships, they scored some crucial goals from set pieces.

Different teams have different use for set pieces. Some use it as main staple for scoring goals, others rely more on open play to get the goals. The quality present in each team dictates the frequency on relying on set pieces to score goals, as well as the proportion of goals scored from set piece plays. The better your team is, the less likely the chance is that they need a set piece to score a goal. On the other hand, even the top sides can use set pieces to force a goal when all else fails.

With set pieces becoming more and more important, it makes sense that managers like you and me are trying to find a way to beat the system, to discover some sort of way to turn set pieces into weapons. Early on in FM14, you had the chance to use an exploit to score from corners. I’m not even talking about the near post corner routine, which seems to work just about every year. No, when you had the proper settings, you allowed a sort of Inside Forward player a free shot from corners. 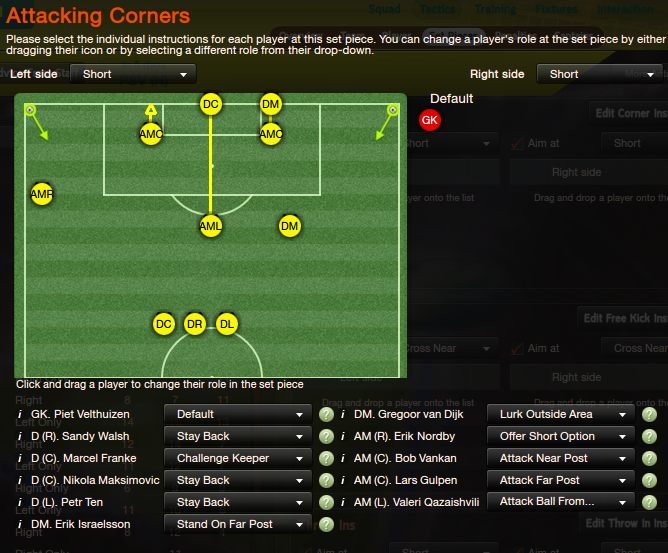 These settings no longer work, but they used to generate a lot of goals.

These settings meant that the player who offered the short option was allowed all the freedom in the world to cut inside and fire on goal. Next up is a match clip, where Nordby scores two almost identical goals using this routine.

SI actually listen to their audience at times, so this exploit was quickly removed from the game with the release of the 14.1.0 patch. This meant a new way to score from corners was required. Fortunately, we can always resort to the old tried and tested recipe of the near post corner. A concept as old as time itsself and which has worked in every version of CM and FM so far. You let a big bloke barge towards the near post, crowd the box with people to tap in rebounds and presto! The FM settings would look sort of like this. 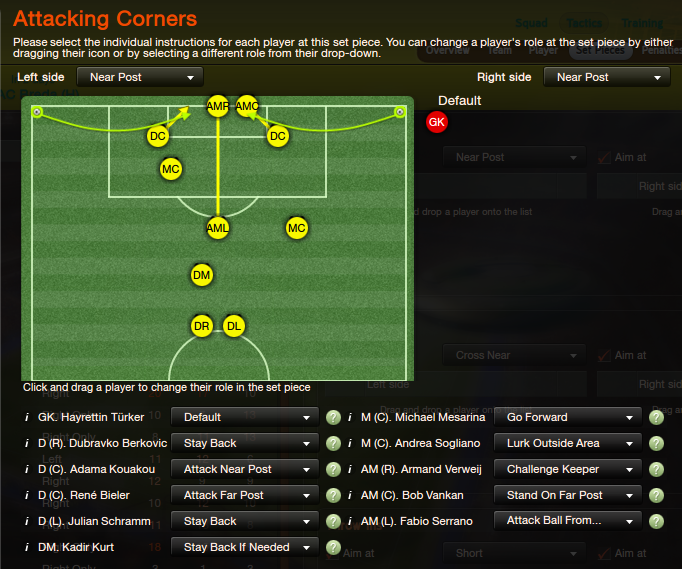 These instructions still work, and quite effectively at that.

In-game, it would look a little something like this.

Yes, it’s basic. Yes, it’s unimaginative. Yes, it’s fucking effective if you have the right players to implement it. 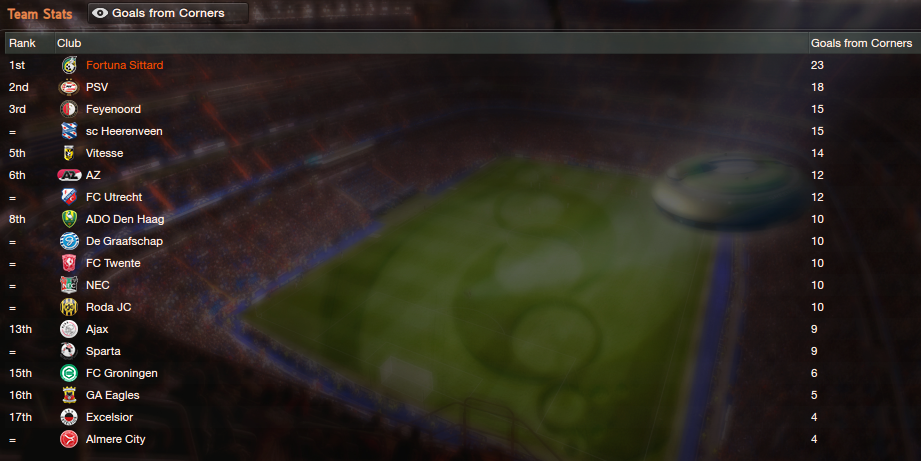 Although the image is a bit distorted due to the fact that my team reigns supreme in the league, it does show that adding a good set piece routine to your arsenal can turn set pieces into deadly weapons.

It would be useful if you would also post a bit about what kind of personnel one needs for effective corners. What attributes are best suited for those attacking the posts versus those running in from deep?

Yeah, I reckon I can add that to the post this week. Good suggestion, mate.

when I count the player on the attacking corner screen, then I count 10 (plus GK).
But someone must execute the corner and can’t be on the field? How does this work?

Correct. I usually leave it to the team to see who takes it, as it means a new variation becomes possible. Each cornertaker removes one player from the equation, which means chances arise for someone else.

Incidentally, did you get here through Tery or through the Meistertrainer forum?

Yeah, I noticed a fair bit of traffic from that site ever since Tery started translating some of my articles.

And I found the side great, by the way 🙂